On Tuesday 15th November Leventhorpe entered the North East Hertforshire Rotary Technology Tournament 2022.  The event was held at Birchwood school, with teams from all the main schools in the area participating.  A huge well done to the KS3 Foundation team from Leventhorpe who were outright overall WINNERS.
The KS5 Advanced team were runners-up in second place to the BS College.

Report by Hannah Cole in Year 10:

The task was to design and build a coin sorting machine in two hours.  To sort out 3 different size coins (1p, 2p and 5p) into three easily removable boxes.

Our team decided to make a slanted wood slab with holes of various sizes cut into the side to ensure that the coins would drop int the correct boxes, the holes where from smallest to largest in order.
Our design was unique as we used two separate slopes to appeal to our target audience and help gain more donations for our chosen charity (Children in Need) because it was more exciting for children to watch.
Our team was made up of four students: Noah, who cut the wood, made sure our coin sorter was able to stand up on its own using different materials and helped make the slopes for the coins. Luke was responsible for the main mechanism in which the coins would be dropped into the boxes.  Hannah measured and made the boxes which collected the separate coins and helped Luke create the test model.  Elizabeth made the portfolio which included sorting out all of our previous designs, labeling and coloring the portfolio and charity designs to make our charity more appealing, also our explaination as to why we had chosen Children in Need as our charity. 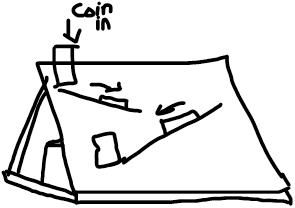 Next time we would need to check the holes to make sure they are cut correctly because one of the coins didn’t make it to the correct box due to the 1p hole being too big.

I believe our whole group had a great time during this task and worked together well, had fun and were focused on the work.  I think it was a great opportunity for all of us and think we tried our best and we were all satisfied with our finished product.

I personally learnt a lot from my team and we were able to bounce ideas off of each other.